Down Country as per tradition at the end of March, to offer company to My Parents and to make myself useful around the house now that My Dad is rather less mobile than he was, so a Sunday lunchtime carvery trip followed by a good afternoon of yardwork gets us off to a good start, but as Spring finally arrives on the calendar it's time to get back on the trail, and as it's been a lot of short trips around so far this must be a cue to get some good miles under my boots. Leicestershire is good country for piling on the forgiving mileages, so another village circuit comes together, almost off the cuff, and deliberately aligned to overlap with my previous circuits of the east of the county, so start out from the yard of the Old Black Horse in Houghton on the Hill, dropped off by My Mum at 9.35am, with it all looking much the same as it did last October, right down to the uninspiring weather. Head northwards up Main Street to the crossing of the A47 and thence out into the countryside along Ingarsby Lane, to take the shortest possible route to my favourite lost village, spotting the burgeoning static solar energy field developing above Houghton village, and this might be the popularist lane in this quarter today as it's here and only here that other wanderers are to be found on these tracks. Rise on the bridleway to the lost village, still as lovable as it ever was, and the lack of vegetation cover this time around means I can see the viaduct over Ingarsby Hollow, the major bridge relic of the GNR Leicester extension line, and that's a nice spot, not seen last time. Eastwards then, on the bridleway that feels like a lane that dropped from the landscape along with Ingarsby village, for some muddy going with attention focused towards Coplow Hill, the distinctive hill in these parts, prominent without being all that tall, hidden away by behind the woodlands of Botany Bay Covert, passed through before arrival on Tilton Lane, running close to the top of the hill. Unfortunately, the wood on the hill top offers no permissive walks of any kind, so a gaze into the trees is all you can offer as the roads skirt around the hilltop, which feels somewhat frustrating as a viewpoint up here would be most welcome to get views towards the city or to the majestic Quenby Hall.

Coplow Lane starts the southward leg, losing much of the modest elevation gained on the way up to Coplow Hill, and offers a look at the much less obvious Life Hill, usually obscured by it taller neighbour, with natural ramparts and all the look of an Iron Age hill fort, I'm puzzled that today is the first time it has dropped onto my radar, as it ought to be as well known as Burrough hill, if it actually ancient, of course. Back to the A47 again, and across the Billesdon Bypass, and on into the satellite village that still sits largely within its footprint of a century ago, and 20th century development hasn't arrived in too obtrusive a way, which is good as this place is hugely characterful and about as far west as building in Rutland Ironstone spread, and its possible to love just about all of it north of the parish church of St John the Baptist. Beyond the less pleasing and largely contemporary southern quarter, Rolleston Lane rises out of the village and off to the B6047 Harborough Road, but across there we can get back to quite tracks as Bushby Road is unadopted and tree lined, working its way into the extensive grounds of Rolleston Hall, where the village is long gone, but a few farms and estate buildings endure to keep the place on the map, and the ridged and furrowed fields are to be enjoyed on the rise up to the Gated Road (of Legend?). It's worth a drift into the hall's grounds along the bridleway to see the tiny church of St John the Baptist (duplicating names again!) hidden among many conifers, but there are no sightlines at all towards the hall, even once you have returned to the lane and headed westwards off the estate back in the direction of the Harborough Road. Field walking resumes on the westward track, taking care not to get in the way of the farm workers in their 4x4, passing through the equestrian fields around Barn farm, and set course towards Illston as I find myself in the midst of the feeding time for the local sheep, discovering that they might antagonise anyone passing through their territory when there's a danger of them getting fed.

Arrive at the top of Ilston on the Hill, and despite still being the heart of Car Trek territory and really not that far from home, this is one name that does not resonate with me at all, and the place would surely be familiar if I had been here before, as the village is not especially large and is also a dead end, as the main road pass across the top of the village, and the sights down Main Street feel like they haven't changed much in the last century. So bucolic feelings all round as paces are made past St Michael and All Angels church, the Fox and Goose pub, and the Manor house, and I will lament the glum skies that fail to light up such a pleasant location, before passing out onto the strange confusion of paths that set out to the southwest, great care being needed to pick the correct one. Tracks lead in the direction of Illston Grange, and its impressive stables, quite some way distant, and attention wanders around the horizon, seeing that the horizon in these parts makes Leicestershire look rather undistinguished as there's little to pick out. Still the grange's estate lands offer a different look, as well as all types of livestock in the huge field that needs to be crossed to get to the Gartree Road crossing, where the former Via Devana has partially passed from use and looks much more like a Roman road than it did around the Strettons. That's a route for another time, though, as I need to head towards Burton Overy, shadowing the lane that leads there for a while before striking into the fields, finding that local farmer seems to have chosen this field corner for silage dumping, and finding secure and dry footing proves way more difficult than it should, and despite staying upright in my passage, I will be spending the rest of the day with dirty boots and stinking of shit. Burton Overy beckons though, with a familiar name but again the uncertainty of having ever visited here before, and like Illston, its another cul-de-sac, only I arrive at its bottom this time, and its quite a bit bigger so the 20th century scarring is a bit more obvious, but the centre is nice, the yard of St Andrew's church offering a late lunch spot, and there's bucolic charm all the way down to the Bell Inn at the bottom, or top, of the village.

Washbrook Lane leads us out of the village, and then onwards along the bridleway to cut off a corner and to not interrupt the nice equestrian lady who is out installing new fences to keep folk away from the horses, and then it's onto Oaks Lane which drives on to the eastern edge of Great Glen, a satellite village which has massively outgrown its old footprint, to become a virtual townlet in its own right. Suburbia doesn't make for the best walking, so hit the bridleway down towards the sewage works and Burton Brook before cutting across the lawn of the old Hall, around the very large fish pond and out to the south edge of the village on the old London Road, thankfully quiet these days now that the A6 has bypassed the village. This is the Great Glen I recognize, with the war memorial, village green and the Pug & Greyhound adjacent, seen so many times on trips going south, and a short way along the River Sence is crossed, still odd to find it in these parts, and then on into the graveyard surrounding the parish church of St Cuthbert, a rare Victorian interloper in the county. Starting the northwards trackfrom Church Lane, hopeful that an old fragment or two of the village might endure, happily located on High Street, and then the bridleway leading to Stretton Magna is found beyond the recreation grounds, heading northwards in about as straight a way as you could wish. It's a good firm surface in the early going, ideal for cycling, and looks to have had some work done to give it a clearer passage in the future, but the continuing spread of Great Glen northwards would worry me that this land may be urban within a decade. Still, all green for now, offering looks to Stretton Hall, a rarely seen former mental institution, and offering a far better profile of St Giles church and the lumps of the vanished Stretton Magna than could be gained from Gartree Road. Mere Road - Stretton Lane is the red route for the remainder of the day, following the eastern perimeter of the Leicester airfield site, and giving me plenty of school run traffic to walk against, feeling good that I can still keep the pace up at this late stage, counting off the side roads and  feeling the last miles drop away. St Catherine's spire is the sentinel to guide us home, but the last bit has me heading off the road to avoid some blind corners, passing up to and around the cricket field to arrive in Houghton once again by the alley next to the primary school. Mechanical steps for the rest of the way, back to the Old Black Horse at 3.40pm, and whilst sharing a drink therein with My Parents would be most appealing, I really need to get back to base as I smell far too agricultural for my own good and my boots are going to need a thorough scrub.


Next Up: Old School walking in the Old Country.
Posted by Christopher Wren at 16:17

Email ThisBlogThis!Share to TwitterShare to FacebookShare to Pinterest
Labels: Down Country, The Old Country, Walking in Circles 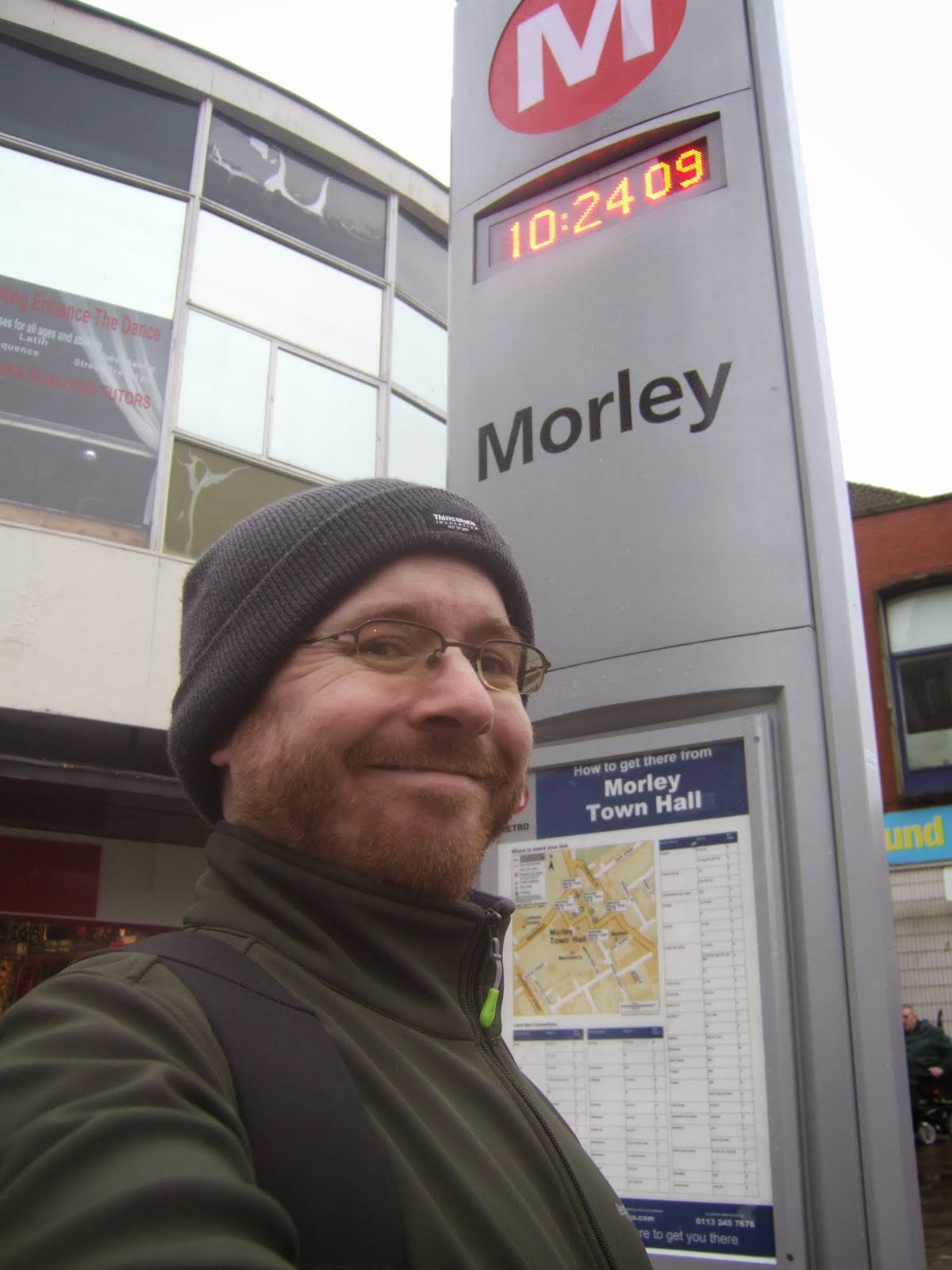